OK, Laurie and I aren't really bikepackers. Our idea of roughing it is a hotel or bed & breakfast. So we don't carry camping gear. But we do enjoy taking overnight or multi-day excursions by bike. Here are some pictures from our latest trip, which wound from Greenbelt through DC and to western Loudoun county VA, mostly along paved trails. We returned via White's ferry and the C&O Canal gravel trail. A total of about 150 miles mostly over gloriously car-free roads. 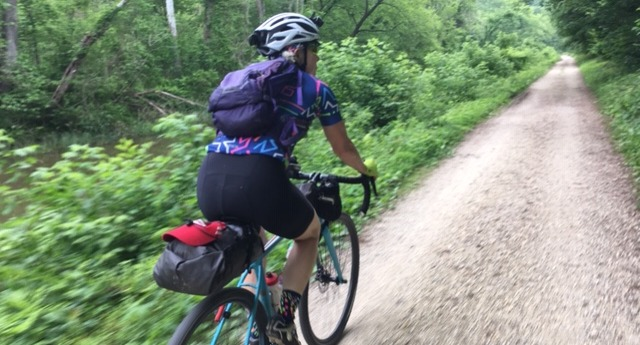 DC to Shirlington VA. Shirlington is right at the foot of the Washington and Old Dominion (W&OD) trail. We stopped there overnight, after a 25 mile, nearly 2 hour ride route from Greenbelt. We went down the Anacostia River Trail, over the S. Capitol Street bridge (narrow but OK sidewalks), past the new soccer stadium and the wharf area, over the 14th street bridge, down the Mt. Vernon trail past National airport (if you look really closely at the picture below you can see a plane landing), and up the Four-Mile Run trail. Shirlington has lots of good restaurants, a Harris Teeter for supplies, and a hotel (we stayed a the Hilton Garden Inn, which was fine). We just bring the bikes up to the room or, if hotels resist that idea, just store them in bell station's store room. It's rare to find a hotel with secure bike parking for overnight, so better to just take them inside. 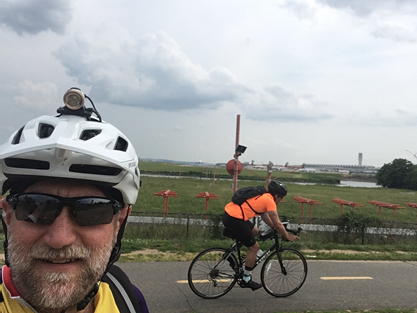 Shirlington to Waterford. The W&OD trail is a straight shot from Shirlington out past Dulles aiport toward Leesburg Va. (route here, about 40 miles). We usually stop for food in Herndon, which has a bike shop right on the trail called the Green Lizard.  As an old rail line, the trail is mostly flat, although there are some very long gradual ascents and descents. Parts of the trail are shady, like this pictured stretch between Leesburg and Purcellville; other sections under the power lines are pretty exposed -- bring sunscreen! 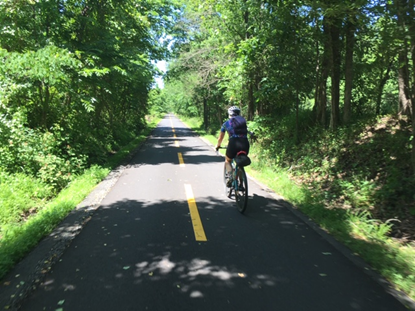 Waterford to Purcellville. We stayed for a few nights outside of Waterford, which is a few miles north of the W&OD (here's the route we took). The roads in that area tend to be hilly -- some are gravel, which we like, some are high-speed, which we don't. There are lots of houses and commuters in the area now, so once you get off trails, pick routes carefully to avoid traffic or dangerous roads. We got back on the W&OD and rode to the end of the trail in Purcellville. Waterford has a wonderful old general store (closed Sunday), but not much else other than scenery and historic homes and buildings. There are some restaurants at the trailhead in Purcellville, and a cool bike shop called Velo Classique. 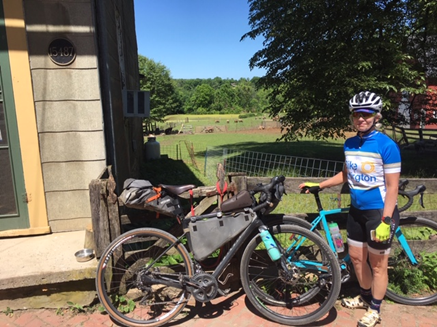 C&O Canal. We crossed back into Maryland at White's Ferry, and took the C&O towpath back to DC (about 60 miles, here's the route). White's Ferry is super easy ($2 per bike) and there's a snack bar and bathroom on the Maryland side. The C&O has been re-surfaced with fine crushed stone from White's Ferry to Lockhouse 25. Even south of that point, the trail was in really good shape when we went through, with very little mud and no detours or issues. Note many of the lockhouses can be rented overnight. There are also campgrounds that I believe are free (first come first served) for the most part. There was one just west of Great Falls at Swains Lock that looked particularly nice. But then again we don't camp, so buyer beware! 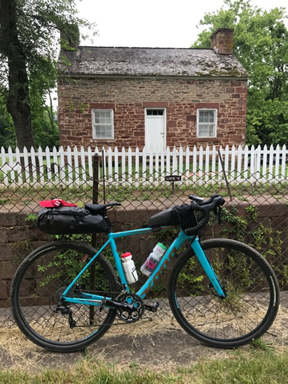 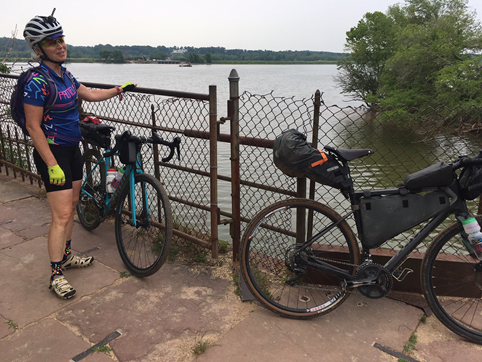