Laurie and I rode the short (54 mile) course at the UnPAved Gravel Race this year.  The weather was spectacular, though the morning start was cool (35 degrees).  She wore arm and leg warmers and a vest jacket. I chose to go naked on the legs but had a wool base layer on top and a wind breaker. Both of us had wool socks and shoe covers, and an ear covering skull cap or Buff.

The race's motto is "Easy on the Eyes, Hard on the Legs" and that sums it up about right.  A little less than half of our course was timed -- more people were there for the ride than the race it seemed.  The distance options were 55, 99, and 120 miles.

Lewisburg is about a 3 hour drive from DC.  We stayed overnight before and after at a farm B&B.  Since it was a timed segment race, you could start whenever you wanted, although they encouraged people to start before 9am if you wanted to be timed.  Lights were required for early starters or expected late finishers.

The race starts on a gravel rail trail, then a few miles of rolling paved hills in nice farm countryside.  Then you start climbing into the forest, a very long uphill timed segment to get up to the top of a long ridge. This climb was hard -- recommend low gearing if you ride this course!  At the top of the climb, and after the timing pad, we stopped to regather.  In retrospect, I should have taken off my jacket before the climb and put it back on the top.  Instead, I got really sweaty on the climb, and then froze on the subsequent short but fast descent!

The descent was followed by a long roller-y timed section called the Hollows, which was my favorite part of the course. The rollers warmed me back up. I also should have remembered to get a power bar at the top of the climb -- I managed to get one down during the roller section, but had the stop to de-glove and lost some time.

The Hollows section ended at a mile 27-ish rest stop, which was well provisioned. I refilled four bottles and got about 2,000 calories worth I think. I also changed into my spare base layer and jersey, and was much more comfy dry on the climb back out.  After a 3rd timed section mostly uphill, I got my jacket back on for the next descent. Except there was another climb!  Finally, a very long, steep white knuckle descent back to farm country, and return to Lewisburg on the rail trail, and the after party. We did about 4,000 feet of climbing, mostly in the big mountain section.

I highly recommend this ride.  The gravel quality was very smooth and well maintained -- you could go very fast.  The only drawback on this ride is there isn't much bike handling.  It's mostly straight line pedaling, though very scenic and quite remote, particularly on the mountain. The organization and amenities were superb throughout.

Here is a link to Joey and Jess's write up for www.paxadventure.com  They took a LOT of great pictures! 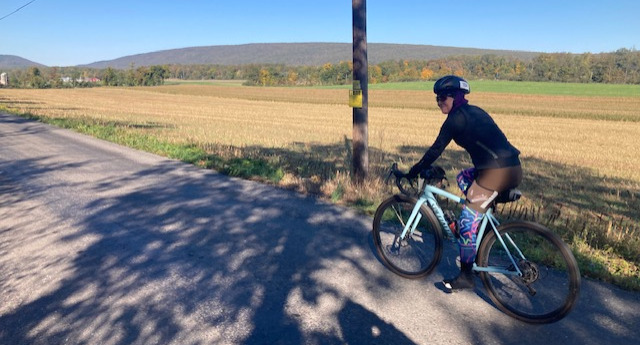 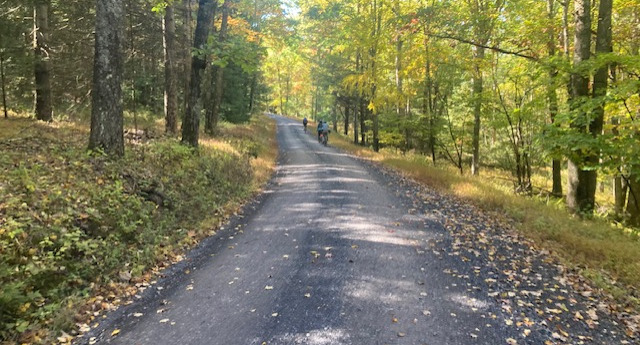