There are so many problems with bike infrastructure in our area that it’s hard to know where to start. Over the last 50 years, the state of Maryland has widened our local arterial roads on the design model of mini-highways, complete with on-ramps and partial cloverleafs, slip lanes, double (and triple) turn lanes, and limited sidewalks and no bike tracks. This design is ugly, encourages speeding and lane weaving, discourages roadside businesses, and makes the roads dangerous to ride on, disgusting to walk beside, and difficult to just get across. Even in a car! (Try crossing Route 1 in front of Proteus to get to the College Park Diner sometime. Actually don’t — it’s too dangerous!)

Widening roads for the highest possible speeds and “throughput” makes traffic light cycles far too long, which, in turn, makes drivers more impatient and further encourages speeding and whiplash driving: hitting the gas to “make” the next light and slamming on the brakes (or not!) when it turns red. The irony is that all the road widening and highway-ization have not only divided our communities, discouraged biking, walking and transit, and hurt business, but it also sucks more than ever to drive places! When everyone is forced to drive everywhere, because any other way of getting around is either unavailable, unsafe or unpleasant, the roads clog up even more! It’s as if the road builders’ goal was to make everybody as angry, frustrated, and antisocial as possible.

What can we do about this?

Well, despite the infrastructure problems, some people are voting with their feet (and their pedals). They’re moving closer to Metro and considering access to bike commuting routes in their housing decisions. Younger (and older!) people are moving back from the distant sprawl burbs to closer-in locations — places where you can actually think about taking the bus, the train, your bike, or a walk when you want to move around.

Some state and local officials are gradually realizing that facilitating greenfield sprawl development at the expense of already-built communities is foolish and wasteful.

In addition to great road riding in the Beltsville farms, our area has some wonderful bike trails and routes, which can be connected together with a little creativity. It’s a great ride from College Park to DC, Hyattsville, Takoma Park, Bowie, even Baltimore if you know the tricks. The Anacostia Trails Heritage Area does a great job advocating for improvements to our existing trails, including better connections to the surrounding neighborhoods and transit stops.

But there is so much more that could be done, mostly very inexpensively, at least compared with highway projects.

Here are two ideas where local voices could help make a big difference in our communities:

1. Help in the design and implementation of better north-south bike connectivity and safety on the bike trails through North College Park and Berwyn Heights/Greenbelt.

A. First, we need to get a better signalization, and better road markings to get north and south on Rhode Island Ave across Greenbelt Road (Route 430) and University Blvd (Route 193). The State Highway Administration is currently in the planning mode for a redo of these intersections, so community input has a chance to be helpful.

Here is a map of the intersection project area from SHA: 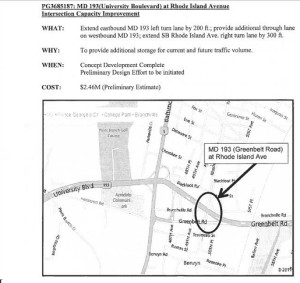 B. Second, we need to build a safe bike path through from the Indian Creek Trail and Lake Artemesia in Berwyn Heights to Cherrywood Lane in Greenbelt.

A continuation of the Indian Creek Trail under 193 (if possible) to Branchville Ave through the Greenbelt Metro South core (aka Bridge to Nowhere development) property to the intersection of Cherrywood and Breezewood Lanes. Ideally, there would be a two-way cycletrack or sidepath on the west side of Cherrywood Lane from Breezewood up to the new roundabout at Greenbelt Metro Drive.

A rebuild of the parking lot behind Chipotle and Chef’s secret to include a through bike track from Branchville Ave (the industrial road by PG scrap that goes under the Bridge to Nowhere) to Cherrywood. This option should ideally cross behind the bus stop and connect to a two-way cycletrack or sidepath on the west side of Cherrywood Lane up to Greenbelt Metro Drive.

2. Encourage the State Highway Administration to rebuild our arterial roads — including Route 1, Route 193 (and the Greenbelt Road spur to Route 1), Route 201 — for all users, with better bike lanes and sidepaths, bus stops, crosswalks, sidewalks, and landscaping — not just more high-speed traffic lanes.

More than a decade ago, the State Highway Administration developed a Greenbelt Road Boulevard Plan (OK, maybe boulevard is an overstatement, but still…). However, these plans were essentially lost from view until October 2013, when an intrepid engineer dug them out of archive at our request. The plans call essentially for minor, but very helpful, landscape and streetscape improvements along 193 from Route 1 to Soil Conservation Service road. The concept plans are hard to read, but I think they envisioned trees, median features (including pedestrian havens?), and bike lanes! The bike lanes appear to be non-protected 6 foot lanes on the sides, which may not be ideal on roads designed for speeds up to 50mph!

However, having a plan implies a starting place, and perhaps these plans could be updated for the latest bike and pedestrian standards. There are plenty of places where lane narrowing or lane diets could be added (the road is vastly overbuilt in most places) to accommodate protected bike lanes instead of painted side lanes.

SHA is said to have this project on their long-term list, and apparently there may even be a funding setup in place!

So we need to get to work. Over the next several weeks, I’ll try to provide information on how to contact representatives and state and county executives to help get this project back and track and updated for modern “complete streets” and/or “green streets” designs.